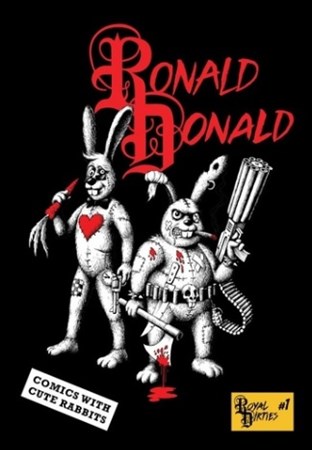 Royal Dirties Comics #1 is the first comic book by the group of artists known as Royal Dirties. This first issue contains a comic story Memento, six comic stories about Ronald & Donald, 2 chapters about The Undertaker from Mokvas by Martin Jurík, a postcard story and comic strips by Tomas Galata.

Ronald & Donald is a couple of cute bunnies who perform their everyday battle for dignity, understanding, money, and mostly food. Some of their actions may be considered harsh or even violent. Therefore back away if you are less then 15 or more than 76. Royal Dirties is a creative workshop of artists from different areas, who gladly demonstrate where exactly is their place in the world - they are having fun!