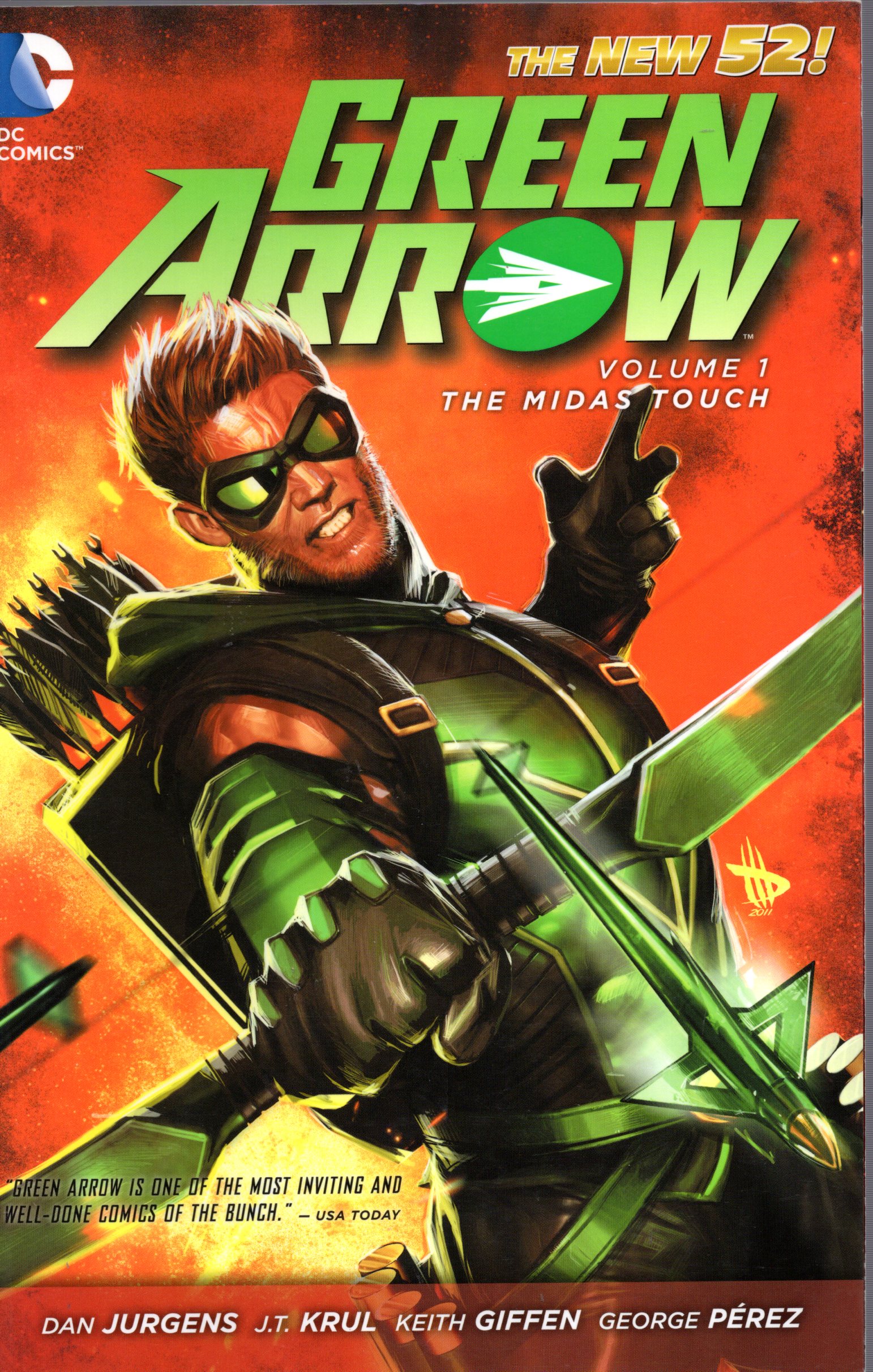 In this title collecting the first six issues of the DC Comics - The New 52 event, Oliver Queen is armed with cutting-edge weaponry and illegally gained intel (courtesy of his team at QCore)! As Green Arrow, he's shooting first and asking questions later

The stress of running a multi-billion dollar corporation and being the guardian of Star City has frayed Oliver Queen's last nerve. When he encounters the genetically modified triplets known as "Skylark" during a mission, Queen, entranced by their beauty and the new techonology they give him, agrees to meet their "father" King Leer. King Leer's fortress, buried deep within a frozen moutainside, hides the true nature of his work, genetically modifying animals of all species - including humans - in order to take over the world! His work is funded by the gold mine he has seized and rules the native people through starvation by polluting the enviornment. Can Oliver Queen stop King Leer before he releases his creations upon the world, or will he end up as one of

Bestselling writer Jeff Lemire and fan-favorite artist Andrea Sorrentino break new ground in the third volume of the emerald archer Green Arrow! As Ollie struggles to come to terms with the loss of his fortune, his company, and his heritage, he discovers a shocking truth about his father that ties to his time stranded on an island before he became Green Arrow. Broken and beaten, Oliver's secrets are revealed as the mysterious Komodo brings him to the brink of death! Collects number 0, numbered 14-20 of Green Arrow.

Jeff Lemire and Andrea Sorrentino begin their ground-breaking saga in the fourth volume of Green Arrow!A mysterious villian called Komodo knows Oliver's secrets and uses them to rob Oliver of all his wealth and his company. Now on the run from this seemingly unstoppable force, Oliver finds himself in a mystery involving the island where he first became Green Arrow and his father! Everything will change for the Emerald Archer in this new beginning for the character.

Oliver Queen thought he had it all figured out. As the heroic archer Green Arrow, he'd finally found a sense of purpose, friends to aid him, even a place on the Justice League of America. But now, he's not even sure where he came
from... or who he came from. As Green Arrow discovers that his stranding on a desert island was more than just an accident, there seems to be more sinister forces at work behind all these sudden revelations. The Queen family is
embroiled in a war generations old. A war of clans. A war of outsiders. Acclaimed creative team Jeff Lemire (Animal Man) and Andrea Sorrentino (I, Vampire) take Green Arrow on his most challenging adventure yet.
Collects issues #25-31.