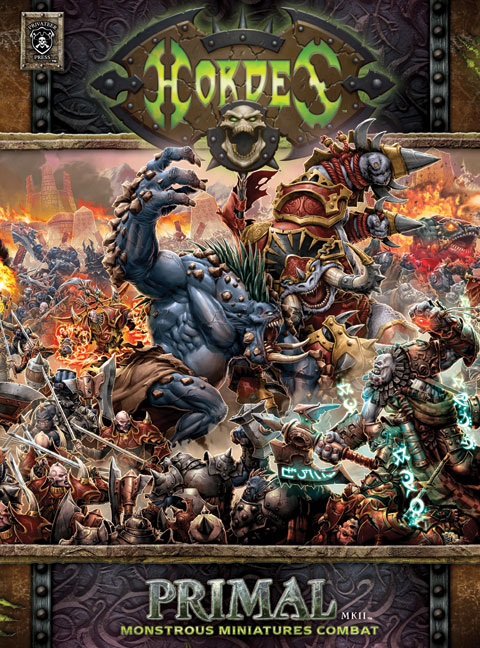 In a world ravaged by warfare, fury is your greatest weapon.

In HORDES, even the earth trembles as towering warbeasts born to fight and trained to kill hurl themselves at their foes in a frenzy of claw and fang that churns the battlefield into a writhing sea of carnage. Within the bloody fog of war, their battle leaders seize this unbridled rage and from it forge momentous weapons to wield against their enemies, knowing only the strongest, fastest, and most cunning will survive.

Take control of a powerful warlock and his horde of fierce warriors and monstrous warbeasts in this fast-paced and aggressive 30 mm tabletop miniatures battle game set in the foreboding wilds of western Immoren, home of the Iron Kingdoms.

*HORDES: Primal Mk II thrusts you into this savage world with:
*Complete core rules for the HORDES tabletop miniatures game
*In-depth histories of the non-human nations of western Immoren and the conflicts that have shaped them.
*Detailed profiles and rules for the powerful warbeasts and soldiers of the Trollbloods, Circle Orboros, Legion of Everblight, and Skorne.
*An instructional painting and hobby guide that will show you how to bring your tabletop battlefield to life.

Seize the unstoppable power of HORDES Mk II and unleash the fury within!