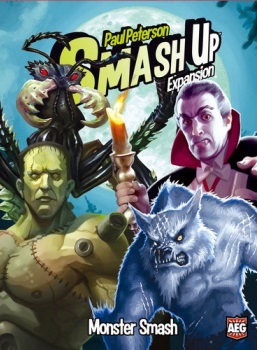 Smash Up: Monster Smash consists of four new factions for Smash Up: vampires, mad scientists, werewolves and giant ants. Tremble before the power of the ants!

- Vampires gain power as they destroy your opponents' minions
- Mad Scientists have released death in the form of powerful creations and can empower various minions
- Werewolves have explosive power to beat down opponents
- Giant Ants work as a great hive mind, spreading their power around as necessary to ensure their atomic-age victory

Smash Up: Monster Smash can be played on its own as a two-player game or combined with other Smash Up titles to allow for up to four players to compete at the same time.

Smash Up has grown up! After many expansions we