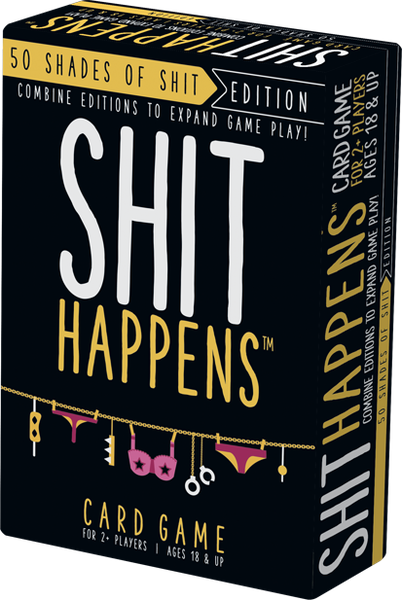 Shit happens to everyone, and it can really happen in the bedroom! In Shit Happens: 50 Shades of Shit, there’s some seriously dirty stuff waiting for you on these cards. You’ll read through them and rank the cards according to their shittiness. Is wearing too-tight underwear BETTER or WORSE than watching a 4-hour sexual harassment training session? Is it WORSE than getting a giant hickey on the neck? Rank the card, and if our Misery Index agrees with you, you get to keep it. Correctly rank 10 cards and you win! For 2 or more players.

These super sexy cards can be played on their own, but if you’re feeling frisky, they’ll make beautiful babies with all of the Shit Happens versions.

200 unique cards not included in the original Shit Happens game.
Can be played as a stand-alone game or as an expansion deck.