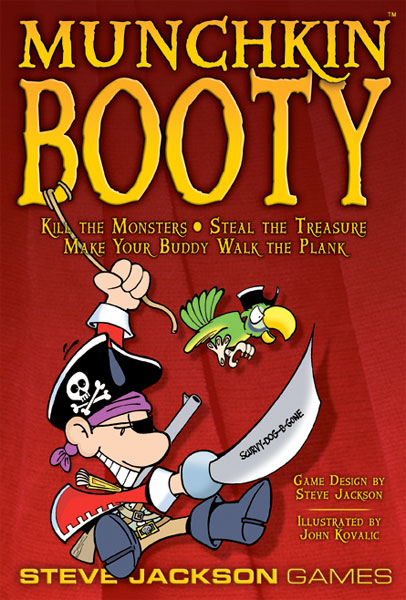 Sail the seven seas. Plunder the treasure. Make your buddy walk the plank.

Munchkin Booty brings the greatest gold-grabbers in history – pirates! – to the world of Munchkin. Use your Silver Long Johns to beat the Lobster Mobster, drink your Demon Rum to fight off the Viking Kittens, and defend yourself with the Cutlass (or Cutlad, for the gents) against the Prince of Whales. But watch out for Sharks!

Rake in the loot as a Pirate, Naval Officer, or Merchant. Taunt your foes with your horrible Accent – British, Spanish, Dutch, or French. Equip your Half-Galleon with a Crow's Nest and Figurehead. But above all . . . level up!

Munchkin Booty is a stand-alone card game designed by Steve Jackson and illustrated by John Kovalic. It is completely compatible with the original Munchkin.

Game contains: 168 cards, a unique six-sided die, and a rulesheet.