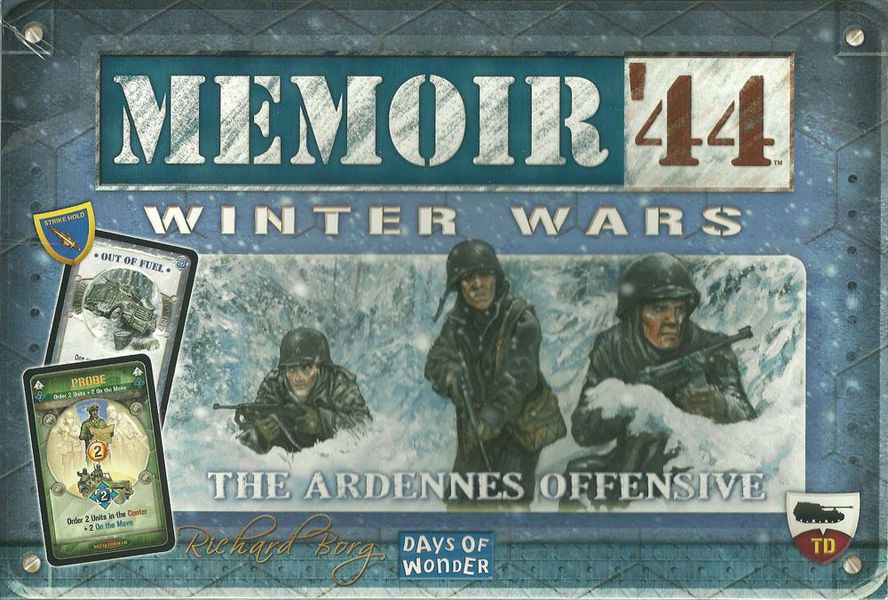 As would befit your ration pack if you were about to embark on one of the coldest and most bitter fights of the war, after 5 long years of weary battles, we have packed this expansion with every thing you could ever need to combat in a snow-covered environment.

But judge for yourself, soldier! Inside this pack you will find:
- 88 double-sided Winter tiles, 28 Special Unit badges, 20 round markers and 16 obstacles
- 20 Winter Combat cards, similar in concept to the Urban Combat cards introduced in Memoir '44: Sword of Stalingrad
- 80 new Command cards, designed specifically for Breakthrough battles
- New Winter Combat rules
- New Troops, including the all new Tank Destroyer and Heavy Anti-Tank Gun units and Late War model versions of an Anti-Tank Gun, Mortar and Machine Gun

These will all be critical to fighting (and winning!) the ten scenarios this booklet contains, all focused on those crucial 2 weeks of Christmas 1944 in the Ardennes. The first six scenarios included are all standard scenarios, playable with a single base game and this expansion alone (though a Memoir '44: Winter/Desert Board Map will add a nice cosmetic touch to your battlefield). The four scenarios that follow are gigantic Breakthrough renditions of the Battle of the Bulge. These will require a single copy of the already released Memoir '44: Eastern Front expansion, and the Memoir '44: Breakthrough maps, in addition to the aforementionned expansion.