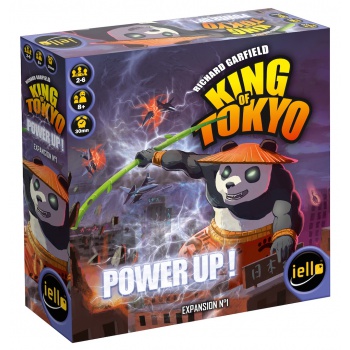 Richard Garfield strikes again with this first expansion for the award-winning game King of Tokyo!
Life in Tokyo just got a little more dangerous! A new Monster has arrived in town: meet the incredible Pandakaï!
Each monster now has its own unique set of evolution cards which can be acquired during play. Some of these evolutions are discarded when played, others are kept like the ‘Keep’ cards in the base game. All evolutions can be kept secret once drawn and are revealed only when played

Rules Review:
At your turn, you get three successive throws after each of which you choose whether to keep or discard each of the six special dice. Your final combination will enable you to win destruction points, hoard energy, restore your health or whack other players into understanding Tokyo is YouR territory.
The fiercest player will be crowned King of Tokyo... and will end up facing all the other monsters alone until he wins the game, gets whack out of the game or decides to let another player take over the city.
Top this off with special cards purchased with energy and granting a permanent or temporary power, and you hold one of the most explosive and fun games ever!
In order to win the game, one must either destroy Tokyo by accumulating 20 destruction points or... be the only surviving monster !

Features:
• First expansion for the international best-seller game. • A new monster : Pandakaï!
• New material to spice up your games!