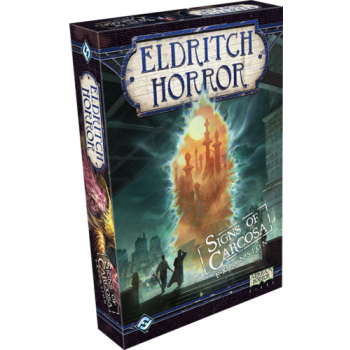 Confront the maddening influence of the Unspeakable One in Signs of
Carcosa, a new expansion for Eldritch Horror. Within this expansion,
you’ll find Hastur entering the game as a new Ancient One, spreading
insanity and dissension. Against this foul abomination from Aldebaran,
four new investigators join the fight to save the world. A host of new
Encounter cards for every continent ensures that fresh adventures are
just around the next street corner, even as a wealth of new conditions,
spells, assets, artifacts, and Mythos cards draws you deeper into a world
of madness and fear.

• The fifth expansion for Eldritch Horror
• Test your might against a new Ancient One: Hastur
• Four new investigators join the fight—Dexter Drake, Wendy Adams, Jenny Barnes, and Michael McGlen
• A host of new encounters, conditions, spells, artifacts, and assets ensure that every game of Eldritch Horror offers new adventure
• Impairment tokens may hinder your abilities as you struggle against the might of Hastur