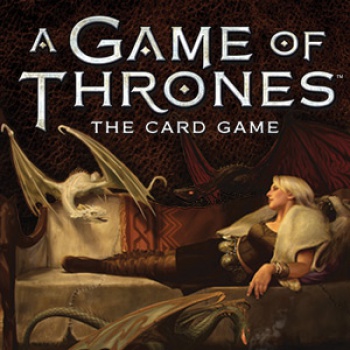 A Game of Thrones: The Card Game 2nd Edition - EN

Enter the world of Westeros with A Game of Thrones: The Card Game Second Edition! In this second edition of our longest-running Living Card Game® (LCG), you command iconic characters from A Song of Ice and Fire in treacherous battles for the Iron Throne. Every turn, you hatch a new plot, then attack your foes in three types of deadly challenges. Whether you play a head-to-head joust or a ultiplayer melee, your struggles span the field of battle, cunning intrigues, and political machinations. Call your banners and battle for the Iron Throne!

• The second edition of Fantasy Flight Games’ longest-running LCG
• Enter the world of Westeros with iconic characters like Eddard Stark, Robert Baratheon, Cersei
Lannister, and Daenerys Targaryen
• Each round, players choose new plot cards to enact their overall strategies
• Three different challenge types invite you to attack your opponents in three different ways
• Two distinct game modes allow you to play a two-player joust or a multiplayer melee with up to
six players